Digital Video Ad Fraud Squeezes The Juice From Your Battery 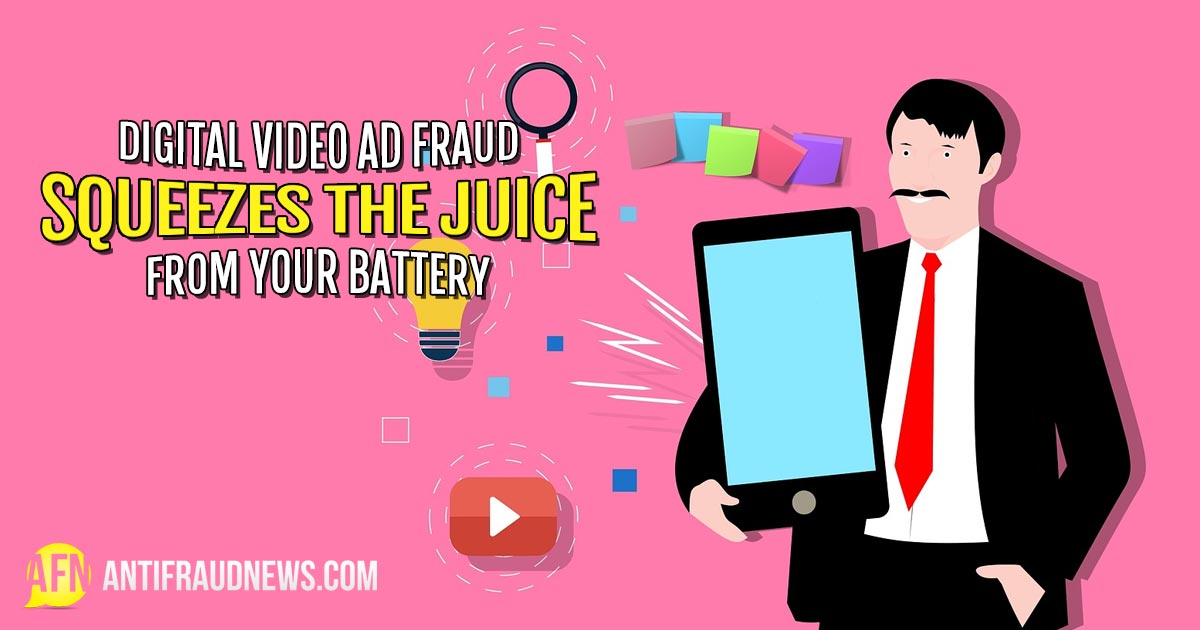 By now you may have heard about digital video ad fraud even though you most probably haven’t done anything to protect yourself from it yet. Billions of dollars are lost to fraudsters annually, making it potentially the second largest organized crime syndicate of all time. The more you know about digital video ad fraud, the greater your chances are of stopping it in its tracks.

What is Digital Video Ad Fraud?

Digital online advertising fraud has been around just as long as digital advertising has been. Falling victim to it only takes one finger click on an online banner that in reality is a hidden video generating fake advertising, that not only drains your data package, but your phone battery too.

Scammers purchase in-app ad space and hide auto-playing videos behind banner images that users see. The video is never actually viewed by the end user, but because it is constantly “playing”, it generates a large advertising income stream for fraudsters. Because the video is playing continuously in the background, it also sucks the life out of your device’s battery, and you (the unsuspecting end-user) will look to blame either handset manufacturers or app developers for your misfortune.

This type of digital ad fraud is known as “Ad Stacking” – a method where multiple ads are stacked on top of each other in the same sold advertising space. Only the top advertisement can be seen by the user, when in reality there are several hidden ads and videos, whose impressions are being registered and billed to the advertiser.

The reason why so many people fall prey to this sort of fraud is because it takes on so many different forms, making it so much harder to identify and stop. Consumers normally take action after they realize their battery is not lasting as long as it used to, and perhaps their data is disappearing a little too quickly. At this stage, the damage has already been done, and millions of dollars have been siphoned from advertisers’ budgets.

How Do I Identify Digital Video Ad Fraud?

If you notice that an app is suddenly using a much higher volume of data or your device’s battery is being drained without a significant surge in usage, you may very well have fallen victim to a digital video ad fraud scheme. The first port of call is to contact the app developer and ask them to investigate. Subscription services need to be canceled via mobile networks as well as directly from the user’s handset. As quickly as this has been actioned, the cycle can start again, and so it is best to be vigilant in checking your data usage all the time.

How Do I Prevent It?

Marketers are having to employ the services of verification vendors and are sourcing trustworthy Accountability Group Certifications. They are also implementing ads.txt, and re-evaluating their advertising supply chain to eliminate fraud streams. Advertisers and internet users are being hit the hardest, and need to make better use of new technology to combat fraud. Being aware of the high-incidence of online video ad fraud is the first step to regaining control of pay-per-click revenue streams being robbed.

How Do I Recover?

If you have been targeted by digital video ad fraud, identifying and implementing click fraud protection software is an essential step in preventing future fraud. This type of software regularly scans for fraudulent video ads running in the background. Once detected, these fake video ads are removed. Although you cannot completely recover from your loss – be it data or a drained battery, or advertising revenue – by taking action quickly, you can stop the scammers in their tracks and save others from future online attacks.

This article was posted in Scam Protection. Bookmark the permalink. Follow comments with the RSS feed for this post.Both comments and trackbacks are closed.
← Safe Travels: Lost Passport, Now What?
Common Used Car Scams You Need To Avoid →