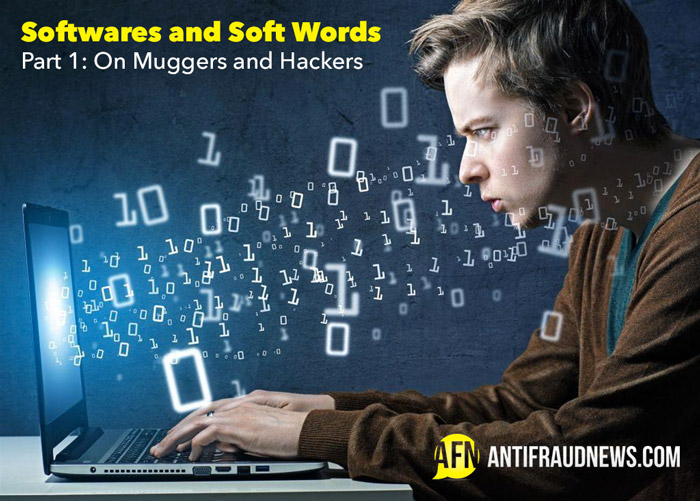 SOFTWARES AND SOFT WORDS –
CYBERCRIME AS A TECHNICAL AND SOCIAL PHENOMENON

PART 1: ON MUGGERS AND HACKERS

The above headlines are something you should be used to as a resident of the virtual world called the internet. Just like in real world you should be used to the idea that different dangers might lurk in the shadowy corners of the reality, on the internet too, you should be aware of the fact that not every one of your fellow virtual internet citizens is as honest and upstanding as you are. This is common knowledge, is it not? So: why even ask a question like that?

The question should be asked because of being aware of the danger is not necessarily the same as being aware of the scale of the danger. Becoming a victim of an internet crime can be extremely damaging. In real life you could lose a wallet to a mugger or perhaps have someone pickpocket you in a crowd. You would likely notice this very quickly and inform the authorities or take other measures to prevent any further damage. In the internet losing just a simple password to a malicious software could cost you a whole lot more: your bank account, your private information, even your very identity. And this could all happen without you even being aware of it before it is too late.

The question should be asked also because headlines like the ones quoted above appear constantly in major newspapers and other sources of information. The police, banks, service providers in internet access, all post notices and warnings informing the people on the latest dangers of the virtual world. And yet the criminals still succeed. Why is that? One reason and explanation is, paradoxically, the lack of awareness of the crimes. The common sense we have in real life is an instinct that keeps us safe from harm outside the internet: you would instinctively know that walking on a dark street in a restless neighborhood in the middle of night alone with your pockets bulging with money might be a bad idea. But the same common sense does not save you in the internet because the virtual reality is different. In real life, the dark street in a restless neighborhood looks menacing. Your senses tell you that you have no good reason to take such a risk. On the internet, criminals specifically use distractions to make your senses tell you everything is fine. And thus you could become a victim of a crime.

In the following articles we discuss how the criminals do this, and how, with a few simple tricks and some solid awareness, you can outwit them and train your common sense to protect you like it would in real life.

This article was posted in Blog. Bookmark the permalink. Follow comments with the RSS feed for this post.Both comments and trackbacks are closed.
← It’s Not “Scamming the Scammers”
Scammers Aren’t Robbers Or Burglars →