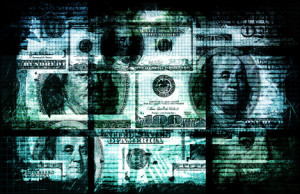 The Black Money or Wash Wash scam is probably one of the strangest advance fee fraud formats in existence, but recent years have seen it coming back into play to extend existing frauds. In this form it poses a severe threat to a victim who has already been terribly mistreated.

Origins of the Black Money or Wash Wash Scam

In its original form a scammer offers a victim a share of a large consignment of banknotes that have been stained black to smuggle them over a border and avoid seizure. Images of black money and black money chemicals are presented at Scamwarners.com.

The scammer then demonstrates how the notes can be recovered by cleaning a few with a special chemical. The chemical quickly removes the black stain and a clean bank note is revealed.

The scammer then explains that it was the only sample of the chemical he had, and that the victim needs to buy more to clean the notes. He may at this stage introduce a second contact who can supposedly supply the chemicals in the quantities required – At a price.

What he does not explain is that the trunk box full of black money is only cut-up black craft paper, not money at all. The victim will then be persuaded to pay more and more for nonexistent or useless chemicals.

While this was historically operated as a scam in its own right, it has since been adopted as a means to prolong a “trunk box” or “next of kin” scam where an impasse has been reached with a paying victim. Actually delivering a parcel of black money and demonstrating the cleaning chemicals to a victim may prove to be the trigger for an already deeply invested victim to continue paying even more money to the scammers.

Websites operated by the scammers which advertise cleaning chemicals exist to reinforce the myth behind the scam, and may also try to cash in on other scammers’ jobs when they fail to deliver the chemicals.

The pretense of smuggling stained banknotes is obviously bizarre when viewed objectively. With the intelligence, scanning and detection methods available, no customs post would be fooled by this if it ever actually took place. The only time banknotes are deliberately stained is to deface them as an anti-theft measure, often with an explosive dye pack slipped into a bag during a robbery, and this staining is permanent and highly traceable. The “Anti-breeze” coating, as well as the strange variety of cleaning chemicals (SSD solution, Vectrol paste, Tebi-manetic powder and others) have no basis in reality, and the pictures of chemical containers on the websites can often be identified as cocktail shakers, toothpaste tubes or similar.

With this said, a victim who is already invested in the initial scam will not look for these clues. They are depending absolutely on the promises of the scammer, and will not look for reasons why the arrangement should fail.

If you are offered black money, simply walk away. If someone you know is receiving black money for any reason, they are in very real danger and you should seriously consider contacting your local law enforcement agency.

This article was posted in Blog and tagged Black Money or Wash Wash Scam, Black Money Scam, Wash Wash Scam. Bookmark the permalink. Follow comments with the RSS feed for this post.Both comments and trackbacks are closed.
← What is Phishing?
Internet Scams, a Global Issue →